The Cosmic Infrared Background ExpeRiment (CIBER) was a rocket-borne instrument that probed the absolute spectrum and spatial anisotropy of the extragalactic Infrared Background (EBL) in a search for signatures from first-light galaxies. Ionizing sources at high redshift (8 < z < 15) generically imprint a distinctive Lyman-cutoff feature and a unique spatial anisotropy signature to the EBL, both of which may be detectable in a short rocket flight. CIBER consisted of a two-color wide-field imager to probe first-light galaxy EBL anisotropies; a high-resolution narrow-band spectrometer to determine the absolute zodiacal foreground brightness using the reflected intensity of the 854.2 nm Ca II Fraunhofer line; and a low-resolution absolute near-infrared spectrometer to search for a redshifted Lyman limit feature in the spectral region between 0.8 - 2.0 μm. 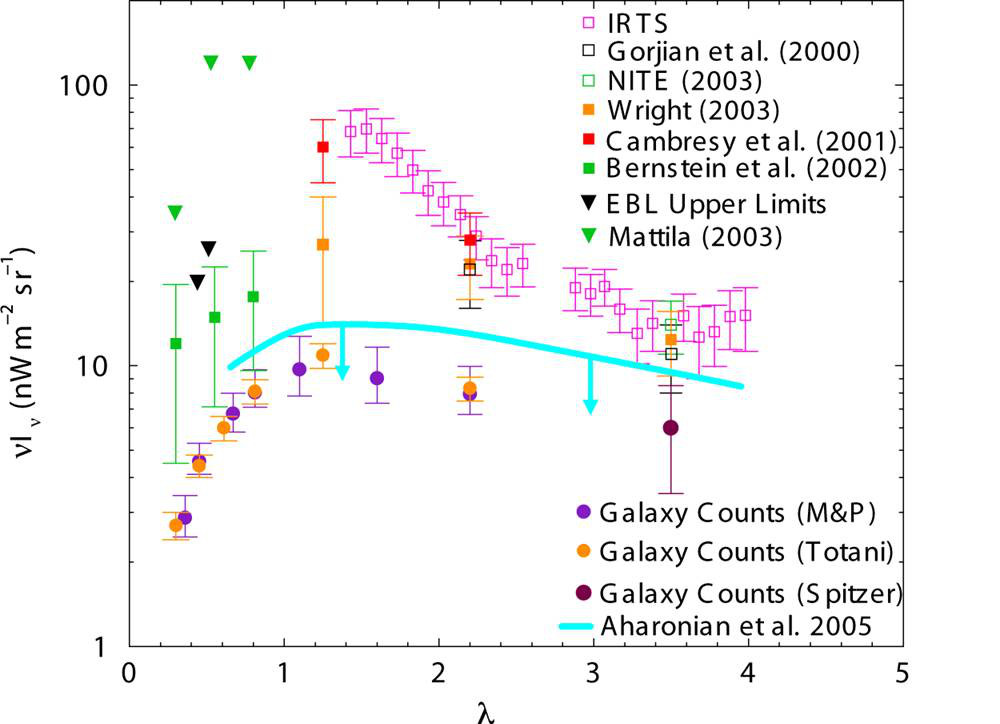 CIBER will answer three main questions: Is the background reported by IRTS real? If the IRTS reported background is not real, then is there a detectable diffuse extragalactic background from the first stars? And, is there a Lyman cutoff feature around 1 μm? [Click to enlarge]

CIBER conducted a pioneering search for EBL anisotropies, and was specifically designed to measure fluctuations at wavelengths and spatial scales where a putative first-light galaxy signal could be best detected and discriminated from foregrounds. No current experiment, such as Spitzer or Akari (formerly ASTRO-F), covers these large angular scales or measures in these key wavelength bands. CIBER will be able to either confirm or refute the recent detection of EBL anisotropies in Spitzer IRAC at 3.6 μm and Akari at 2.4 μm, ascribed to infrared emission from clustered first-light galaxies.

The spatial power spectrum of first-light galaxy fluctuations, determined by the dark matter distribution at z ~ 8, peaks at an angular scale of 10 arcmin, and differs significantly from the clustering of "local" z = 1- 3 galaxies. By virtue of its field of view, CIBER covered the most important, and virtually unexplored, large angular scales for probing first-light galaxy fluctuations.

Comparison of the EBL brightness reported by DIRBE, IRTS and HST provides indirect evidence of a significant change in background intensity between 0.8 and 1.25 μm. This apparent drop in the EBL brightness coincides with the red-shifted Ly-cutoff feature from first-light galaxy formation. CIBER will survey the spectrally unexplored 0.8 - 2.0 μm region with the low-resolution absolute spectrometer to search for such a feature. 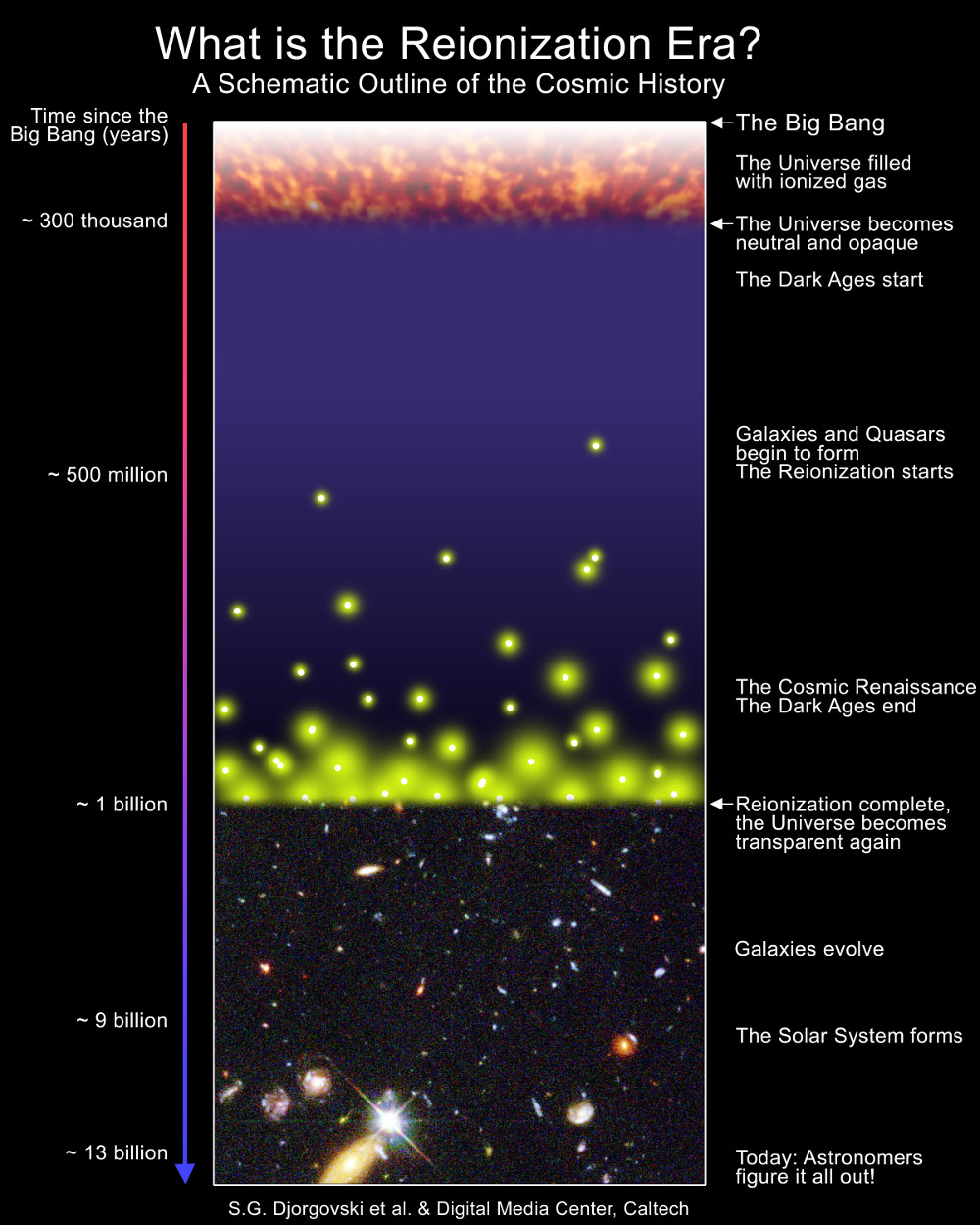 The epoch of reionization was the era during which the first population of stars in the Universe, seeded by the same over-densities visible in the cosmic microwave background radiation, ionized the neutral hydrogen then ubiquitously present in the Universe. The epoch of reionization is at the forefront of current cosmological research, and what little is known about it suggests it was virtually complete at the earliest times we are able to probe with today's best optical instruments. The details of the process, such as when it began, how long it took, and what class of sources produced it, are not known. The image to the left shows our current understanding of the process of reionization, which began roughly 500 million years after the big bang and was complete about 500 million years later. A promising way to study the epoch of reionization is using the fluctuations it causes in the infra-red background. 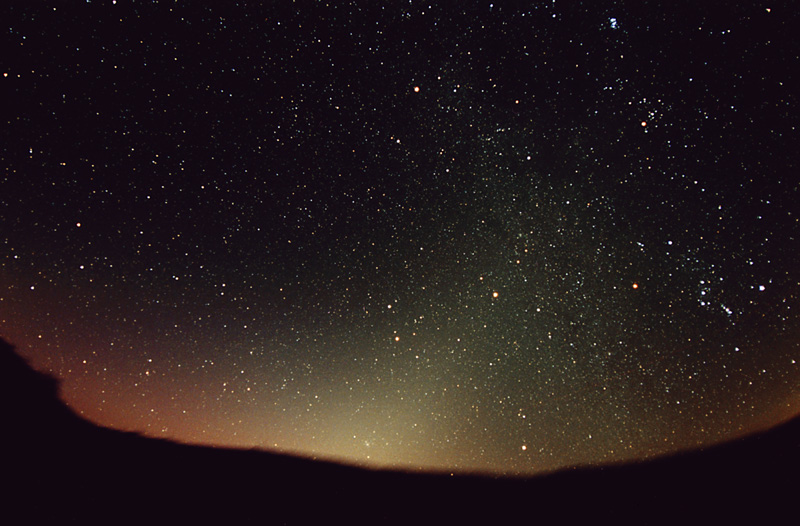 Zodiacal light can be viewed without the aid of a telescope. This photo was taken in the early morning on September 2, 2003, facing east toward the constellation Gemini. The redish haze seen on the left-hand side of the image is auroral glow. [Click to enlarge]

A recent upper limit on the near-infrared EBL using TeV blazars disagrees markedly with direct photometry measurements. Photometric background measurements (e.g. DEBLE and IRTS) must accurately measure and subtract zodiacal foreground emission, dominated by sunlight scattered by interplanetary dust particles at near-infrared wavelengths. Disagreements about the zodiacal foreground intensity remain, and the choice of zodiacal model significantly alters the derived extragalactic background intensity, most notably at 1.2 μm. CIBER uses a high resolution spectrometer to measure the intensity of the Ca II 854.2 nm Fraunhofer line in the zodiacal light, and thus directly determines the zodiacal intensity. This measurement serves as an independent check of the DEBLE zodiacal model, upon which all near-infrared absolute background measurements are currently based.